Disney+ has officially ordered an eight-episode limited prequel series to 2017’s live-action Beauty and the Beast film which will feature Luke Evans and Josh Gad who are reprising their roles as Gaston and LeFou (a.k.a. Louie).

The news comes on the 30th anniversary of Disney’s beloved 1991 animated classic. Developed, written, and executive produced by co-showrunners Gad, Edward Kitsis, and Adam Horowitz, the musical series will add Briana Middleton into the fold as Louie’s stepsister Tilly. Production is slated to begin in the spring of 2022. 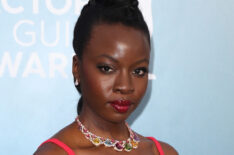 Actress is also lined up for 'Wakanda Forever' movie.
- Advertisement -

Featuring an original soundtrack from composer Alan Menken, the show’s creative team also includes Tony-winning Liesl Tommy who will direct the first episode, both will executive produce. Glenn Slater will pen the lyrics for the first episode as well.

The show will return to the iconic kingdom of Beauty and the Beast before Belle and the Beast’s romance and follow Gaston and LeFou as they set off on an adventure with Tilly. The journey is sparked when a surprising revelation from Tilly’s past comes to light. Expect romance, comedy, and adventure as old friends and new enemies reveal that this kingdom holds many secrets. “For anyone who’s ever wondered how a brute like Gaston and a goof like LeFou could have ever become friends and partners, or how a mystical enchantress came to cast that fateful spell on the prince-turned-beast, this series will finally provide those answers…and provoke a whole new set of questions,” said Gary Marsh, president and chief creative officer of Disney Branded Television.

Stay tuned for updates as the new series featuring fan-favorite characters begins to take shape at Disney+ and catch up on Gaston and LeFou’s adventures in the 2017 film now.

This article originally ran on tvinsider.com.