I wrote this after reading Longfellow's "Wreck of  the Hesperus." It helps to have a dictionary handy. 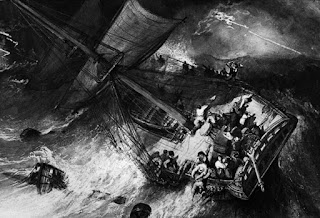 The Wreck of the Inarticulate

t was the Inarticulate
That sailed the ocean blue —
A schooner, brig, or barquentine,
Nobody really knew.
Skippèr and crew were fearless men
Whose only major failing
Was total ignorance about
The lexicon of sailing.
Jibs and stu’n’s’ls, martingales,
Gammon, tack and luff,
Braces, ratlines, gaffs and stays —
They knew it all as “stuff.”
Scuttle, course, and mizzenmast,
To them, were all the same.
They cheesed a Flemish coil down,
But never knew its name.
And so, one bleak December morn,
As the gales began to blow,
And every blessèd man on deck
Was blinded by the snow,
The skipper called upon them all
To save the found’ring rig:
“Bring the pointy part around,
And hoist the thingamajig!”
Every man looked back at him
With vacant, blinking eyes,
Uncertain what to make of his
Obscure, despèrate cries.
The skipper shook his fist and thundered,
“Come on! Do your job!
Turn the what’s-is over there!
Raise the thingamabob!”
Every man looked back at him
Immobile as before,
As swells and billows tossed the ship
And drove it toward the shore.
The skipper gave it one more shot,
His last ’twas ever heard:
“Helmsman, hold those things and spin the —
Darn it! What’s the word?”
Just then a wave loomed overhead
And with a deaf’ning roar,
It swept the skipper and his crew
From what they called the “floor.”
At last, the rush of breakers
And the mewing of a gull
Made music for the rocks that stove
What real tars call the “hull.”
For weeks thereafter, passengers
Aboard the island ferry
Saw, floating mid the ship’s debris,
A sailing dictionary.
So sank the Inarticulate
With all her crew and cargo.
Lord save us from chagrin like that
Upon the Reef of Argot!
Joe Barron
January 9-11, 2018